If you’ve been happily buried under a rock for the past six months, as I apparently have been, you probably have missed all the hubbub about the new EU VAT rules. From everything I can see so far, I am seriously risking my business if I continue selling to customers in EU countries. Let me explain.

Every country on the planet (ok, mostly every country on the planet) has some sort of taxation strategy that on the whole, most small businesses ignore because we don’t make enough money to be of interest to some other taxing authority to pursue. Most of the time, when we ship goods to other countries, we leave it to the customs authorities to levy taxes on the recipients, and our only role in complying with tax laws in other countries involves being truthful on the customs forms.

For sellers of digital goods, the most we tend to worry about is whether the customer got what they paid for, and taxes never enter our minds. Here in the US, none of the states where I am registered charge taxes on the types of digital goods that I sell (at least the last time I checked.) So it never even occurred to me to check whether those same rules applied around the world.

Apparently, in the EU, there have been laws around this, but they tended to only impact companies registered in an EU country, and in the UK specifically, there was an €81,000 threshold before the rules applied to you. Also the laws were based on the location of the seller, so if you were outside the EU, it seemed not to apply.

Now, those rules have changed, and I think it is threatening to bring digital sales of quilting patterns & classes to a complete halt.  At least, in my case it is. Basically, if you sell a digital anything to anyone who lives in an EU member state, you are required to collect, remit, and file VAT returns on all your sales. Even if you just sold ONE item. A digital sale to any EU country makes your business subject to these rules.

The new rules go into effect on January 1, 2015, which is only 16 days from now, and I don’t think that’s enough time to come up with a plan on how to address this… other than to remove the 28 countries that make up the EU from the list of countries I sell to. 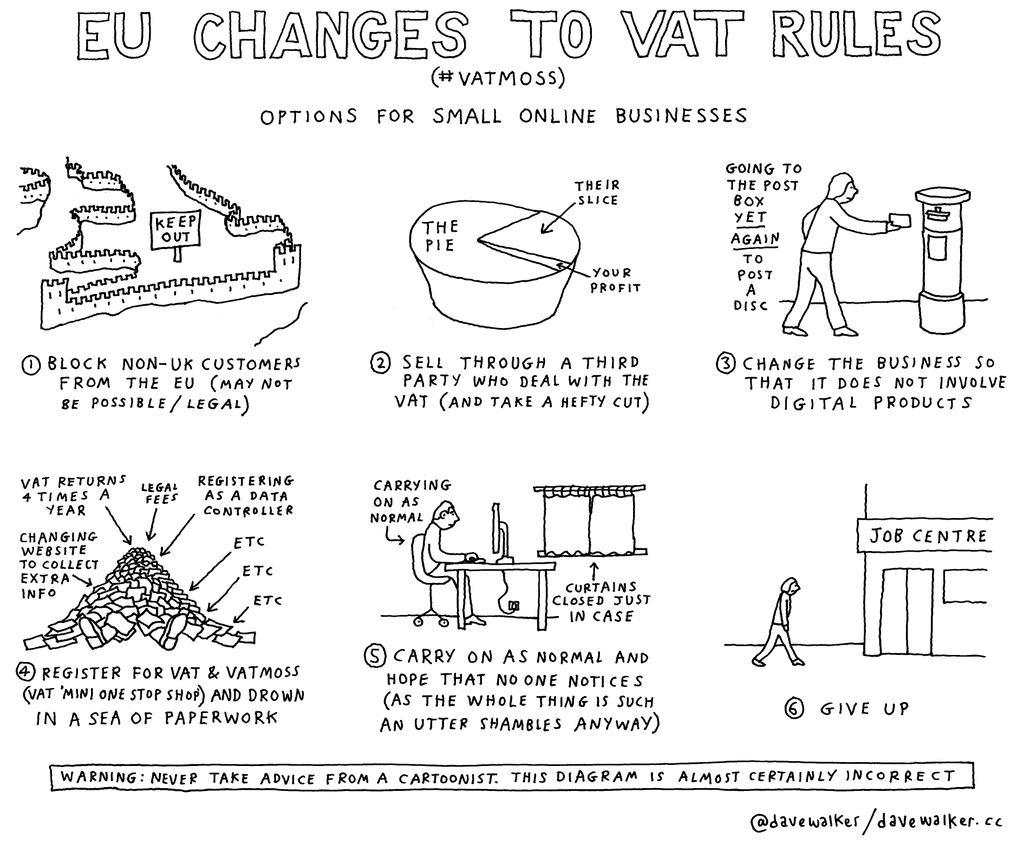 If you think my company is just too small to be of interest to the EU Taxing Authorities, then you haven’t seen the hard ball they are playing. They’ve indicated they have some special software, trolling the internet, looking for companies who flaunt the rules and they are serious about enforcing their tax laws.  They’ve shifted the burden onto the seller to determine where the customer is located, to charge the appropriate VAT, and to remit that VAT to the EU taxing authority.  Oh, and to keep all those records of sales for 10 years (which actually violates privacy laws in some of the EU countries themselves.) It’s basically a big fat mess that I really don’t need right now.

It doesn’t help that every time the HMRC talks about this subject, they answer with conflicting statements, and apparently didn’t do much research at all into the impact this would have on indie designers and micro businesses. In their rush to catch Amazon and Apple in their digital net, they’ve effectively caught us all.

I’ve heard some folks proclaim that since they don’t live in the EU, they don’t have to comply with the EU laws. The US Department of Commerce doesn’t seem to agree, and are providing guidance to US companies on how to comply with the new rules. The way their laws are currently written, there is no limit on penalties, and no business is too small to require registration.

I don’t know about you, but I’m not willing to risk my entire business and livelihood on the off chance that they can’t enforce their rules because I’m a US Citizen. As it stands, EU country sales represents less than 1% of my business, and I can’t put 100% of my business at risk for 1% of my customer base – as much as I love my EU peeps.

I’m really at a loss as to what to do… I wish I had a better answer other than “stop selling to the EU” – but I take my business seriously and I try to do everything I can to comply with laws and regulations.  As it stands now though – I have a hard enough time keeping up with all the tax laws in my own state and country, let alone complying with another 28 countries with a really convoluted system.

If you’re interested in learning more about this topic, there are folks who’ve done a much better job at summarizing the issue. I’d be curious to know if any of you have read about this and have considered the impact this will have on your business or as a consumer.

THEY DIDN’T KNOW – THE IMPACT OF #VATMOSS ON REALLY SMALL BUSINESSES – November 26, 2014 by Ysolda Teague